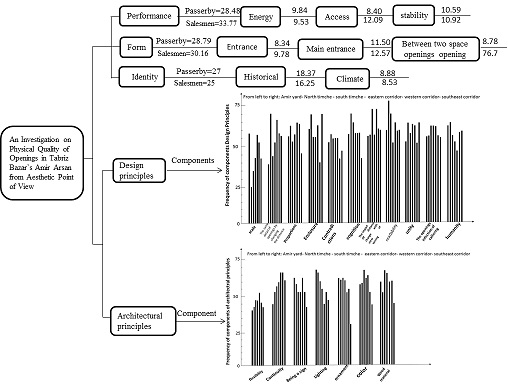 Extended Abstract
Objective and Background: The philosophy of openings, including doors and windows, and their formation process is very sophisticated. These elements are considered important aspects of the history and aesthetic values of the buildings. The architecture of these areas is of remarkable interest in sentimentality, structure, geometry, design principles, scale, decoration, consistency, etc. However, further investigations are required to recognize these valuable elements for future research and the progress of the studies and efforts. In recent years, the salesmen admit that the opening areas in Amir Arsan complex have been changed tremendously. In addition, the performance of these areas has also been transformed. The high-quality wood materials used to reconstruct opening areas have been recently replaced with metal frames. There, the openings do not seem compatible with the whole environment anymore. In some cases, the openings have been projected from the building, blocking the passages and deteriorating the building legibility. Moreover, the new decorations in the openings are not related to Bazar’s architecture, and the initial architectural precise details of Bazar have been lost. Most of the opening inscriptions that were added to the stores in the form of Azari Kalil vaults have been destroyed now, and only a few have remained. The aforementioned variations indicate the loss of originality in these valuable places. The continuation of this miss-performance may cause severe damages and destroy the identity of these areas.
Methods: The present study was performed via field research, documentology of the existing literature, and the use of questionnaires analyzed on a Likert scale. This study is comprised of two questionnaires that are based on the researcher’s investigations. An evaluated statistical society has been chosen randomly. The statistical population in the first questionnaire is composed of 30 passersby and 30 salesmen. The error coefficient was measured as 5% using the Cochran equation. The second questionnaire was distributed among 20 experts. In the first questionnaire, the quality of openings has been investigated based on three parameters, including performance, appearance, and identity. The obtained data were further analyzed with SPSS software, and Kolmogorov–Smirnov test was used to measure the normal distribution of the scores for the studied parameters. In order to compare the three aforementioned parameters for two sub-groups, including the passersby and the salesmen, a one-way analysis of variance (one-way ANOVA) was utilized. The second questionnaire was based on location and compared the quality factors in two groups of design principles and architectural principles in seven locations.
Findings: A one-way analysis of variance (ANOVA) was utilized in the first questionnaire to help the two groups of salesmen and passersby evaluate the parameter of “performance” and its sub-factors. According to the results, the salesmen liked the parameter of “performance” (in the design of openings) more than the passersby; their average score values were 33.77 and 28.48, respectively. In the “energy” sub-factor, the passersby were more in agreement (9.84 average) than the salesmen (9.53). The sub-factors of “accessibility” and “strength” were scored 12.09 and 10.92 by the salesmen, which was more than the average score scored by the passersby (8.40 and 10.59). The obtained results in the “form” parameter suggest average value scores of 30.16 and 28.79 for the salesmen and passersby. In the case of sub-factors related to “entrance openings” and “main space”, the salesmen scored higher (9.78 and 12.57) than the passersby (8.34 and 11.50). Eventually, in the case of the third parameter, “the connection of the two openings entrances and main space”, the passersby admired the openings in these spaces more than salesmen, and their average scores were 8.78 and 7.76. The parameter of “identity” was the last investigated one, which was comprised of two “history” and “ecology” sub-factors. In the case of these two sub-factors, passersby scored 27, 18.37, and 8.88, which were more than the values scored by salesmen (25, 16.25, and 8.53). In the second questionnaire, concerning the quality of openings from the experts’ viewpoints, the obtained scores in the seven investigated locations (ranged from 19 to 109) indicate three weak (19-49), medium (50-79), and good (80-109) scales. Overall, the quality of openings in Amir Yard, the north Amir Timcheh, and south Amir Timcheh, Amir Rasteh (alley), east Dalan (corridor), west Dalan, and southeast Dalan was scored 55, 57, 56, 51, 54, 53, and 45, respectively. These scores were finally evaluated as weak.
Conclusion: The results reveal that there are 12 kinds of openings with inscriptions and 7 kinds of openings with coloring patterns in this Arsan. The average numeric values of the opening quality are scored 65 and 71 by salesmen and passersby from a total score of 115; they are indicated as low values. The quality of openings scored from 31 to 151 in three different rates (poor: 31-71, medium: 72-111, and good: 112-151). The quality of openings was scored in three rated from 19 to 109 according to expert’s opinion (poor: 19-49, medium: 50-79, and good: 80-109). As a result, the quality of openings in Amir yard, north Timcheh, south Timcheh, Amir Rasteh (alley), east Dalan (corridor), west Dalan, and southeast Dalan was scored 55, 57, 56, 51, 54, 53, and 45 respectively, which can be evaluated as medium scores. The quality of designing principles for openings in north Timcheh had the highest score, and the other places such as east Dalan, south Timcheh, Amir yard, west and east Dalans were rated differently. The quality of architectural principles had the highest score in south Timcheh, and the lower scores were related to the Yard, north Timcheh, east and west Dalan, Amir Rasteh, and southeast Dalan, respectively. The weakness areas of the openings are related to the lack of identity in the openings, ignoring the effect of color in the reconstruction of openings, narrow openings in Amir yard, the inconsistency of the yard openings due to different opening heights (the height of window surface to yard surface), visual distortions, and various changes in southeast Dalan. Consequently, paying attention to the parameters with low scores and proposing different solutions for improving the opening quality is necessary. It is also essential to enhance the existing potentials such as traditional and historical structural forms that are compatible with the environmental aspects. 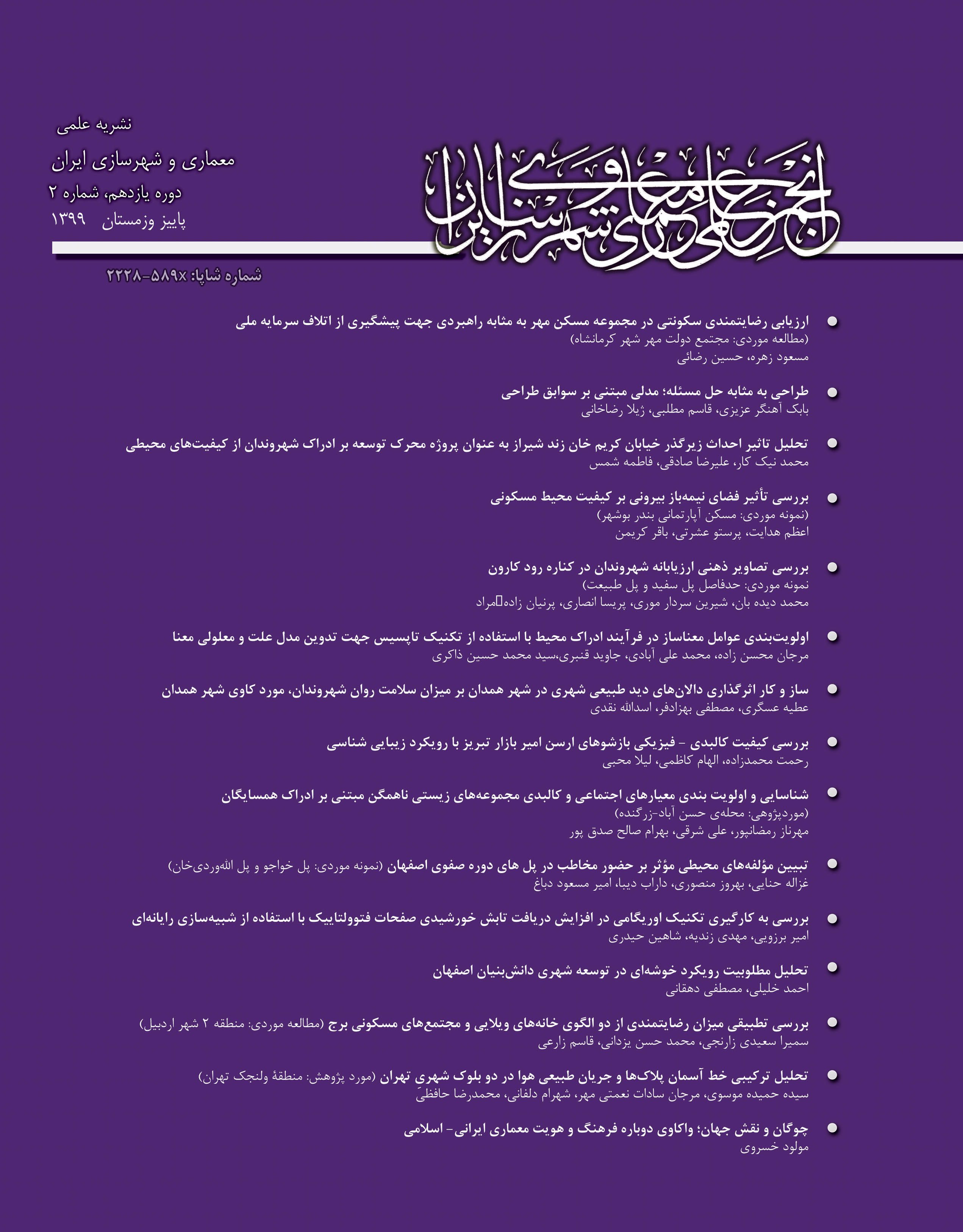