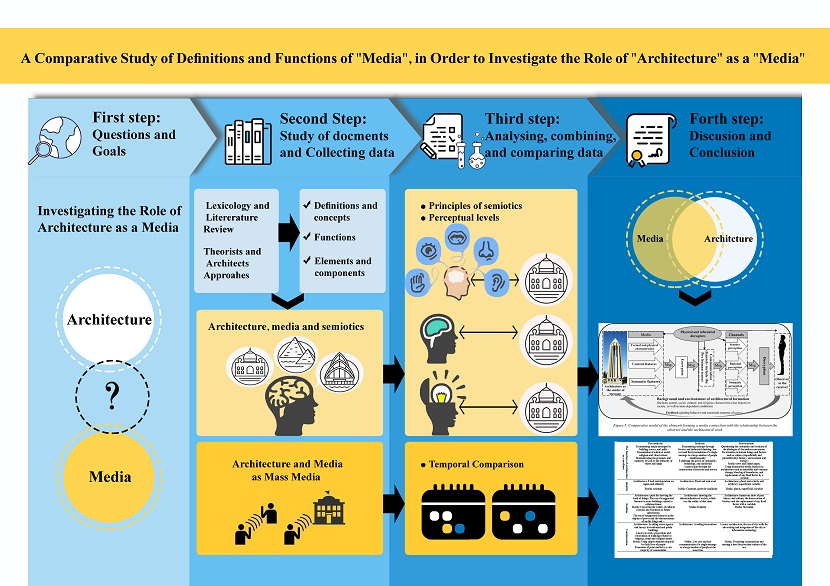 Comparative study of definitions, functions, and elements of “media” to examine the role of “architecture” as a “media”

Extended Abstract
Objective and Background: As social means in the cultural and historical context, architecture and media are heavily involved in the daily lives of human beings. Humans can achieve a good understanding of their relationship with the architecture of their immediate surroundings. By observing the environment, human beings can receive clues and signs to organize and formulate the whole environment with their information and memories. Thus, they can communicate with the environment in which they live and exchange information with their surroundings as an interface. Although architecture seems to be a practical field of study, it also acts similar to a means of mass communication. The intermediating role of architecture raises the fundamental question of whether architecture can be considered a media based on its different attitudes and functions. The significance of studying this issue is that both architecture and media are among the factors that encompass various aspects of human life. If architecture is considered a type of media, its effects on human life, as well as its various policies in dealing with cultural, moral, and other aspects must be considered.
Methods: The present study is qualitative research that, using a systematic and holistic approach, analyzes, combines, and adapts the two architectural and media systems. Semiotic approaches have also been employed to analyze the relationship between body, content, and meaning of architecture and human perception and cognition. Also, in order to study the epistemology and ontology of the two systems, i.e., architecture and media, both were comparatively matched with one another. Lastly, the model of similarity between architecture and media and their common points have been obtained by a comparative analysis. For data collection, documentary sources have been employed.
Findings: The first step in this paper is to examine the definitions of architecture and media from the lexicography perspective and the views of theorists and architects. The results of this step and the study of the role and function of media suggest that the features and definitions of the media can be examined from two perspectives. In the original function, the media is considered as a text and a means of communicating with the audience and a system of symbols studied under semiotics. As for the second function, the media is considered a means of mass communication for human beings. It involves features that, if considered for architecture as well, can change architecture to a media with similar characteristics and functions. Therefore, in the second step, architecture was considered a text that can be read and understood better through semiotics and emphasized the signification process. Hence, by summarizing the views of theorists and semioticians, the architectural works are cognized and understood in three stages of sensory, intellectual, and semantic aspects, in which the sensory layer depends on recognizing body and form, its description, and the examining of its functional and syntactic aspects. This, in turn, leads to the identification of artistic themes through sensory aesthetics, and the rational factors form the connections between artistic themes with ideas and concepts in a logical and conventional way via the method of structuralist semiotics. Through their symbolic, schematic, iconic, or compositional implications, semantic factor lead to the understanding and interpretation of the notion of architecture based on the basic tendencies of the human mind, including psychology or individual, social or universal worldview, as well as intellectual, cultural, religious, ideological, and philosophical foundations. In the next step, in order to examine the role of architecture and media as means of mass communication, three Toffler media courses were adapted to three periods of pre-modern, modern, and postmodern in architectural courses. According to the results of this section, architecture and media have had common features in each historical stage, and it is safe to say that architecture can influence various aspects of human life such as identity, values, culture, and recognition of reality through its unique features. In the final step, the components of media and architecture were comparatively matched. According to the findings of this section, a communication process can be thought including three main factors: the message sender, the message receiver, and the message; while other components are introduced as media elements, communication channels, encryption and decryption, disruptor or noise, feedback, texture, and context. Accordingly, the physical, formal, content, and semantic features of architectural work, themselves constituting the architectural structure, act as a medium that conveys the architectural message to the user through communication channels including the five senses and human perception. In this definition, the factors interfering with the delivery of the architectural message may be either physical (such as annoying noise, insufficient or blinding light) or inferential (such as the complexity or anonymity of the message content and meaning) that includes both physical and semantic aspects of the architecture. Moreover, important factors for comprehending the symbol and deciphering the architectural message and its formation include spatial and textural position, social, cultural, religious and philosophical context, and time-dependent conditions. Audience and user feedback towards the decoded message of architecture is also a behavioral clue and an emotional response that results from the perception and spatial experience of architectural space within the audience. Finally, a comparative model of the elements creating media relations and the relationship between the audience and the architectural work is proposed.
Conclusion: This study suggests that architecture can be considered a media by meeting the elements of the message sender and the audience, the message, encryption and decryption, communication channel, media factor, context, and disruptive factors. These elements assist humans in conveying the architectural message using physical, semantic, and content features through the five senses and the power of the mind and perception. 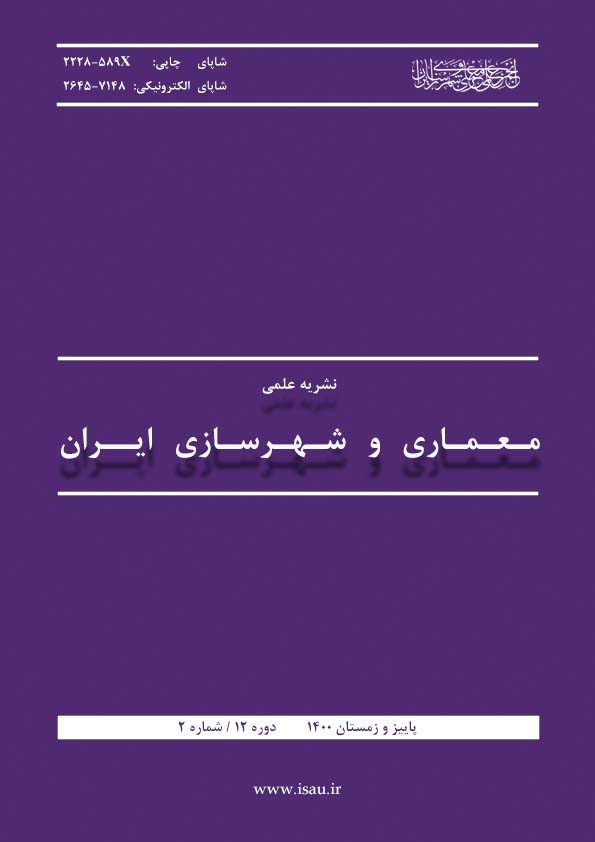