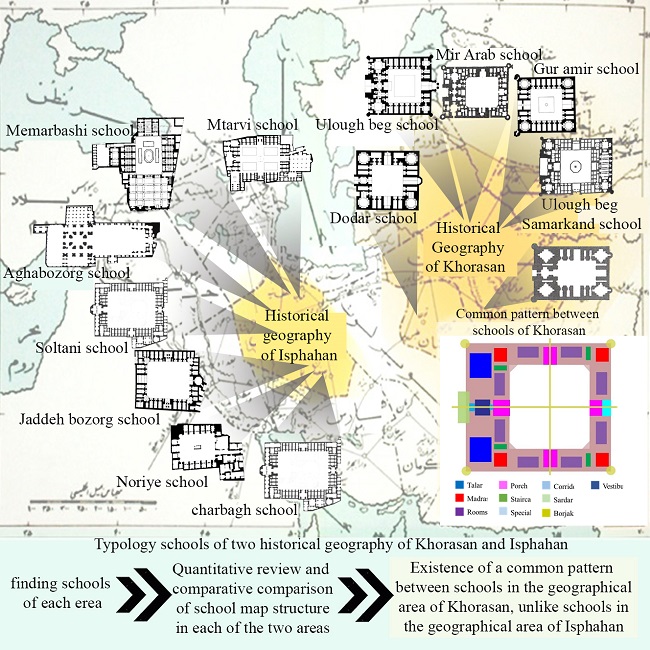 Extended Abstract
Background and Objectives: Schools are among the most important buildings in Iranian art and architecture history. Studying and researching the design of the schools of the Islamic period, as prominent examples, is an effective step toward recognizing their identity. So far, various studies have been conducted in the field of typology of these schools. Still, evaluating cases from two specific areas of historical geography in a comparative study is the distinctive point of this research. Historical geography, along with other factors such as construction methods and architectural achievements of different periods, is one of the important components of historic buildings that need to be considered to identify their architecture. Less attention has been paid to the history of Iranian architecture. The term historical geography used in this article does not refer to specific climatic geography but to a territorial area that has been an unwritten alliance over centuries of trade, cultural, economic, ethnic, linguistic, and common interests. It has created spontaneity in the policy and style of civilization. The approach of historical geography includes in itself the factor of history and the issues within it (such as historical events, dynasties of government, and social life), as well as geography as an important factor in determining the place of residence and influence in socio-political life. Therefore, the study of schools and their typologies from this perspective takes a deeper look at approaches that address these goals only from a specific aspect (for example, government dynasties or a specific location). This article aims to discuss the typology of schools located in two areas of the historical geography of Greater Khorasan and Isfahan. The question here is whether schools located in a specific geographical area follow a specific pattern in architectural design.
Methods: The research method in the present study is descriptive-analytical and case study and is presented in the form of the content of qualitative research. At the same time, for better accuracy and validity of the results, some quantitative analyses in matching and categorizing the findings were used. In this regard, after explaining the concept of historical geography, description of the historical geography of Khorasan and Isfahan, and also the reason for their selection, schools in each of the two areas were identified. Then the samples were selected by purposive sampling method. The samples were first described and then analyzed by bibliographic study of the documents, resources, and field studies. Finally, the common features between the schools and the existing model between them, if any, are introduced. capability).
Findings: Knowledge of historical geography is one of the most important scientific fields and current topics in the world. In this science, human spatial relations are introduced in the form of the past to better understand today’s geographical issues. Topics include the impact of geographical environments on historical events, the evolution of states and border changes, and the history of geographical and scientific discoveries. It helps us better understand the current situation by reconstructing geographical phenomena that do not exist. New world systems and structures can also be based on cultural and social domains by explaining and recognizing places from a comprehensive geographical-historical perspective. Given the rich potential of Iran’s historical geography, this knowledge can be used in architectural research in Iran. Therefore, this approach has been used to study schools. Among the various territorial areas of Iran, we can mention the historical geography of Greater Khorasan and Isfahan. The name Greater Khorasan in the early Middle Ages generally referred to all the Islamic states located from the eastern part of the Lut Desert to the mountains of India. According to today’s maps, the scope of research in the Greater Khorasan Basin includes the provinces of Khorasan Razavi, North and South Khorasan, as well as major parts of Afghanistan, Tajikistan, Uzbekistan, Turkmenistan, and Kyrgyzstan. The scope of research in the province of Isfahan includes the current provinces of Isfahan, Kashan, Qazvin, Qom, Arak, and parts of Tehran. After identifying areas, schools were each identified. Selected cases from the Greater Khorasan Basin include the schools of Gur Amir, Dodar, Balasar, Gowharshad, Ghiasieh Khargerd, Ulugh-beg Samarkand, Shirdor, Soltan Hossein Bayqara, Mir Arab, Ulugh-beg Ghojdiwan, Ulugh-beg Bukhara and the school in front of it. Schools in Isfahan also include Nouri, Jeddah Bozorg, Jeddah Kuchak, Nim-Avard, Kase garan, Araban, Marvi, Sardar, Agha Bozorg, Salehieh, Memarbashi and Soltani in Kashan. The research findings show that due to the many common features between the schools of the historical geography of Greater Khorasan, a clear pattern can be found: they all have yards in the form of hasht-o-nimhasht or squares. The number of porches is two or four. Most cases have two or four minerates in the outer corner of the facade. There are always halls on both sides of the entrance, which are often larger than the teaching zones in size and proportions. The entrance is usually slightly in front of the entrance. Stairs are located in the corners of the yard. Some examples may have a specific element that other schools do not. If present, this element is always located on the main axis and on the front. Regarding the schools in Isfahan, it should be said that due to the variety in number, location, and even the shape of architectural elements and components, a specific pattern is not seen.
Conclusion: The knowledge of historical geography is a pure and deep context for studying the history of Irani-an architecture, especially the typology of historical buildings. From this perspective, only buildings with historical and geographical commonalities can be categorized in a group. The studies of this research show a specific pattern in architectural design among the schools of Greater Khorasan. In contrast, this is not the case among schools in Isfahan. 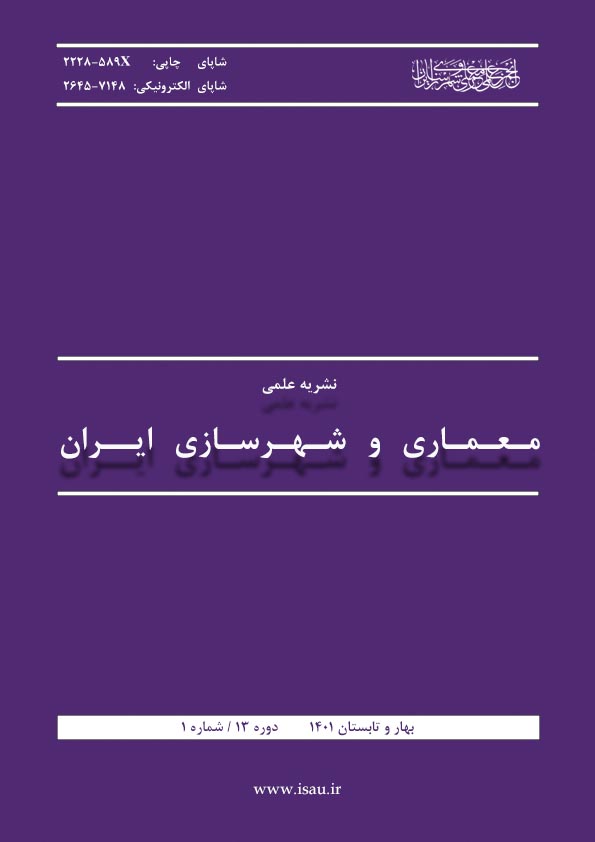